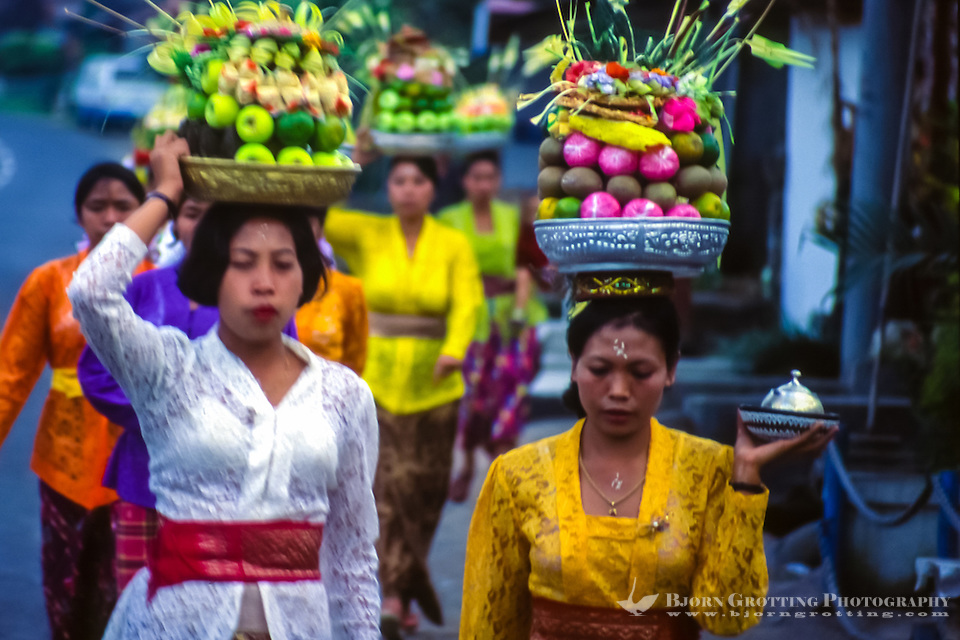 Bali, Tabanan, Bedugul. Women on their way to the temple with offerings to the gods. In the temple the offerings will be blessed and then brought back home to be eaten. (Photo Bjorn Grotting)

There is probably no group in Indonesia more aware of its own ethnic identity than the nearly 2.5 million Balinese. Inhabitants of the islands of Bali and Lombok and the western half of Sumbawa, Balinese are often portrayed as a graceful, poised, and aesthetically inclined people.

Although such descriptions date back six centuries or more and are at least partially based on legend, this characterization is also partly based on events in contemporary Indonesia.

Virtually no part of Bali escaped the watchful gaze of tourists who came in increasing numbers each year to enjoy the island’s beautiful beaches and stately temples, and to seek out an “authentic” experience of this perceived “traditional” culture. The market for traditional carvings, dance performances, and paintings boomed, and many Balinese successfully reinvested their earnings in further development of these highly profitable art forms.

Balinese have a long history of contrasting themselves profitably with outsiders. Although Hinduism had already established a foothold on Bali, the contemporary distinctive Hindu religious practices of the Balinese date back at least to the fifteenth and sixteenth centuries, when Javanese princes from Majapahit fled the advances of Islam and sought refuge in Bali, where they were absorbed into the local culture. Since that time, Balinese, with the exception of a minority of Muslims in the north, have maintained a generally anti-Islamic political stance, preserving a great pride in their own culture. Indeed, segregation between themselves and outsiders has been an organizing factor in Balinese culture.

Like the Javanese, Balinese society is stratified. It possesses the small hereditary Brahman class, as well as small groups of Vaishya and Kshatriya classes that draw on Indian caste terminology. However, the Balinese caste system involves no occupational specializations or ideas about ritual contaminations between the ranks. It does not prohibit marriage between ranks, but does forbid women to marry beneath their class. The vast majority of Balinese, including many wealthy entrepreneurs and prominent politicians, belong to the Shudra (commoner-servant) class.

Unlike most Javanese, Balinese participate enthusiastically in several interlocking corporate groups beyond the immediate family. One of the most important of these is the dadia, or patrilineal descent group. This is a group of people who claim descent through the male line from a common ancestor. The group maintains a temple to that ancestor, a treasury to support rituals associated with it, and certain chosen leaders. The prestige of a dadia depends in part on how widespread and powerful its members are. However, most of these organized groups tend to be localized, because it is easier to maintain local support for its activities and its temple. Balinese prefer to draw spouses from within this group. These corporate kin groups can also be the basis for organizing important economic activities, such as carving cooperatives, gold and silverworking cooperatives, painting studios, and dance troupes.

In addition, Balinese are members of a banjar, or village compound, which overlaps with, but is not identical to, the dadia. The social groups share responsibility for security, economic cooperation in the tourist trade, and the formation of intervillage alliances. The banjar is a council of household heads and is responsible for marriage, divorce, and inheritance transactions. In addition, it is the unit for mobilizing resources and labor for the spectacular cremations for which Bali has become increasingly well known. Each banjar may have individual orchestra, dance, and weaving clubs. 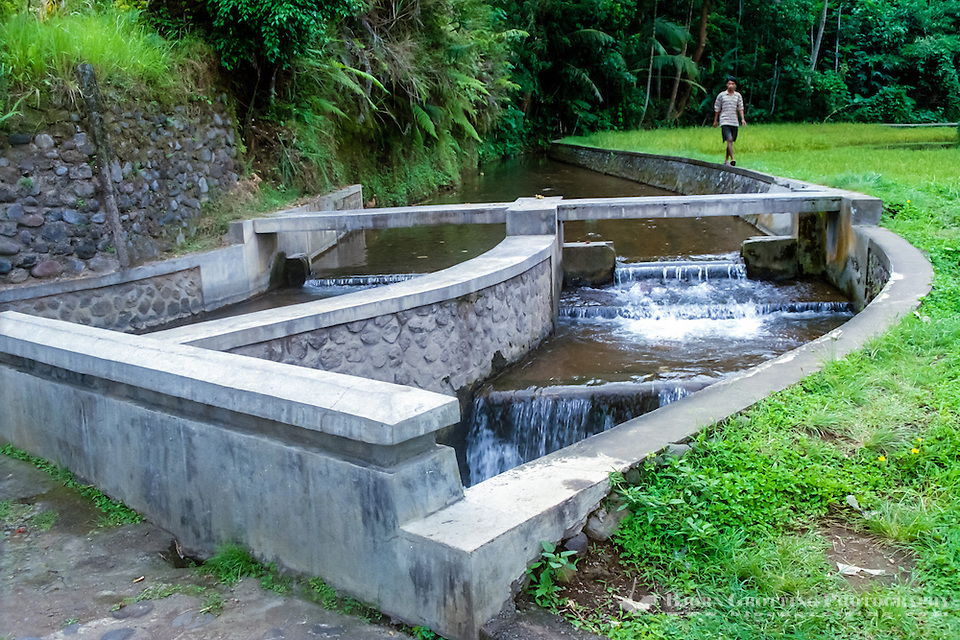 Bali, Gianyar, Gunung Kawi. Water for irrigation of rice fields on Bali. The watersystem is always managed by the farmer with the lowest fields, in that way all the farmers are guaranteed a regular waterflow. (Photo Bjorn Grotting)

Yet another important corporate group is the agricultural society, or subak, each of which corresponds to a section of wet-rice paddies. Each subak is not only a congregation of members who are jointly responsible for sacrificing at a temple placed in the center of this group of rice paddies, but also a unit that organizes the flow of water, planting, and harvesting. Since fifty or more societies sometimes tap into a common stream of water for the irrigation of their land, complex coordination of planting and harvesting schedules is required. This complexity arises because each subak has become independent of all the others. Although the government has attempted periodically to take control of the irrigation schedule, these efforts have produced mixed results, leading to a movement in the early 1990s to return the authority for the agricultural schedule to the traditional and highly successful interlocking subak arrangement.

The very complexity of Balinese social organization has provided it with the flexibility to adapt to the pressures of modern life and its requirements for the accumulation, distribution, and mobilization of capital and technological resources. Although the Balinese remain self-consciously “traditional,” they have been neither rigid in that tradition nor resistant to change.