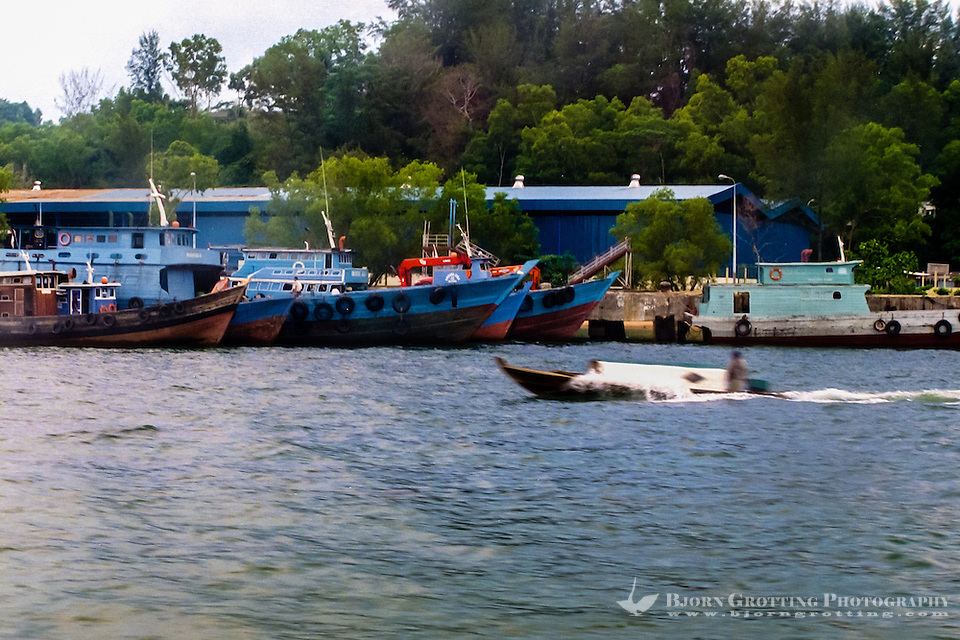 Batam is one of the largest islands in the Riau archipelago, and not long ago it was just another poor island with coastal villages and unspoiled nature. The declaration of the Batam free trade zone in 1989 has turned the island upside down, after just a few years of rapid construction it now has a modern airport, tourist and business centers and a still growing infrastructure that has changed the island completely.

It is no secret that nearby Singapore is the role model, and the goal is eventually to become one of the biggest ports of Southeast Asia and a major center of international trade, industry and commerce. The strategic location close to the Malacca Strait and Singapore will certainly help reaching this goal, but like the rest of Indonesia the economy and development here was dealt a major blow during and after the Asia economic crisis in the late 1990’s.

Batam is actually one of fastest growing tourist destinations in Indonesia in terms of visitor arrivals. There are several tourist resorts here with luxurious hotels and golf courses. Many visitors however choose to use Batam only as an entry point, it is only 40 minutes from Singapore with boat, and then leave with the first available transport to other destinations in Indonesia.

The history of Batam is tightly interwoven with nearby Bintan island and the rest of the Riau archipelago. According to Chinese chronicles Batam was already inhabited as early as 231 A.D. when Singapore island was still called Pulau Ujung (Ujung Island). It came under control of the Malacca kingdom from the 13th century, and later taken over by the Sultan of Johor who ruled until the 18th century. The coastal villages that face Singapore is said to have been a hideout for pirates who hijacked ships in the strait.

In 1824 the name of the island again appear in the Treaty of London which led to the division of the region between the Dutch and the British. Batam and the surrounding islands later became part of the Riau Lingga Kingdom, a situation that lasted until 1911, when the Dutch East Indies colonial administration took over.

The native people of Batam are of Malay origin, but with the rapid growth and development of the area various ethnic groups from all over Indonesia has come here in search for jobs and a better life. Traditionally most of the people live in coastal villages, while the “Orang Laut” (sea people) continue to live on boathouses and boats and generally fish for a living. Some of their catch are sold to Singapore. Bahasa Indonesia is the language used to communicate among the multi-ethnic population here, while many now also understand English, which is commonly used in business communication.

Even if Batam is multi-ethnic it is still the Malayan culture and Islam which forms the root of the local culture. Both daily life and the ceremonies have religious and mythical elements, expressed in dance, music and other forms of art. Some of the most popular traditional dances are Jogi Dance, unique for Batam, Zapin Dance, which reflects strong Arabic influence, Persembahan Dance, to welcome honored guests and Ronggeng Dance, where the guests can be invited to come up and join the dance and song. 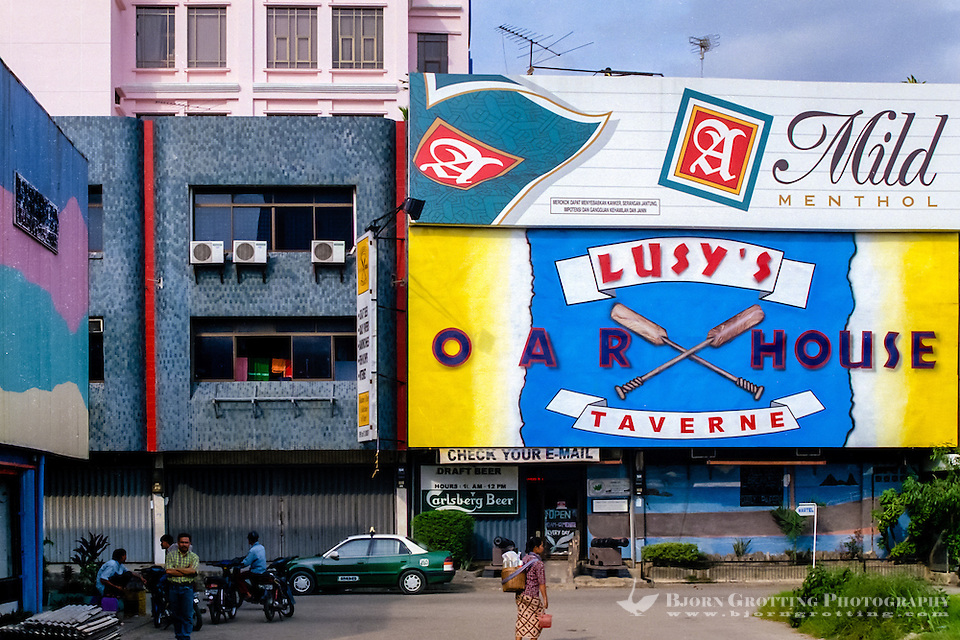 The Mak Yong drama is a dance and song performance which tell the story about a country named “Riuh”, commonly believed to be the origin of the name of the Riau province. This country is governed by a wise and popular king, who one day to his surprise and embarrassment is told that his princess have given birth to an animal called “Siput Gondang” (the gondang snail). Upset by this he orders the newborn to be expelled to the jungle. A couple of years later he is told that the snail has begun to grow, and he asks for the snail to be brought to the Royal Palace where the shell is broken. To his surprise and joy he can see a beautiful princess appear from the broken shell, and he names her Putri Siput Gondang (Princess Siput Gondang), celebrations are then held for seven days and seven nights.

But also other cultures contribute to the Batam community, and in the “Padepokan Seni” art center in Sekupang you can see arts and crafts from all over Indonesia, as well as various kinds of performances which are staged every day for visitors and tourists. Another art center in Sekupang is “Desa Seni”, Indonesian art village, which main objective is to “maintain, conserve and develop Indonesian culture”, and also to manage the Cultural Institute where qualified instructors conduct various shows and courses. 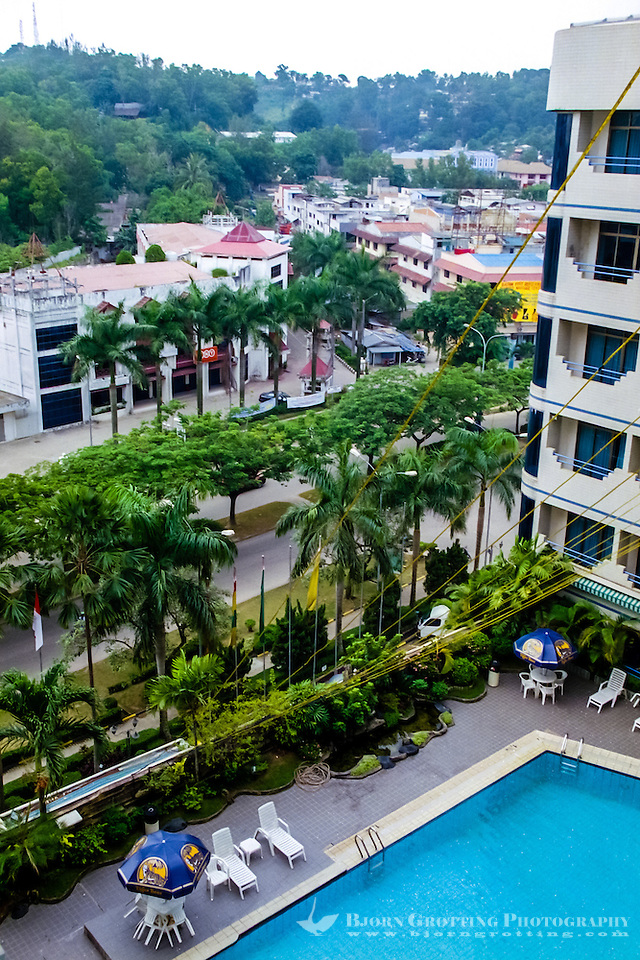 Indonesia, Riau, Batam. View from one of the many hotels in Nagoya. (Photo Bjorn Grotting)

You may easily find hotels of all standards here, from five star hotels with all facilities to budget losmen. The most expensive rooms can be found in Nagoya or at the tourist resorts at Nongsa on the northeast part of the island. The tourism here has seen a steep decline lately, so you may get a good bargain. More reasonable priced rooms can be found in Nagoya or elsewhere, but the budget rooms are said to be of less quality and overpriced compared to most other areas in Indonesia.

Riau is well known for its fresh and delicious seafood. Prawns, live fish, lobsters, clams and shellfish are cooked in a variety of styles, a local specialty is the “gong-gong” conch shell dipped in a spicy sauce. To find a seafood restaurant is no problem, especially in Nagoya, Batu Besar, Batu Merah and Telaga Punggur. At Nongsa you can eat in a “kelong”, a restaurant built over the sea on stilts. Singaporeans even come here for a late night meal at a Batam restaurant and return the same evening to Singapore. You can of course also find other traditional Indonesian food here, like Padang food. In Nagoya you can try the night markets or the Pujasera Nagoya food center. 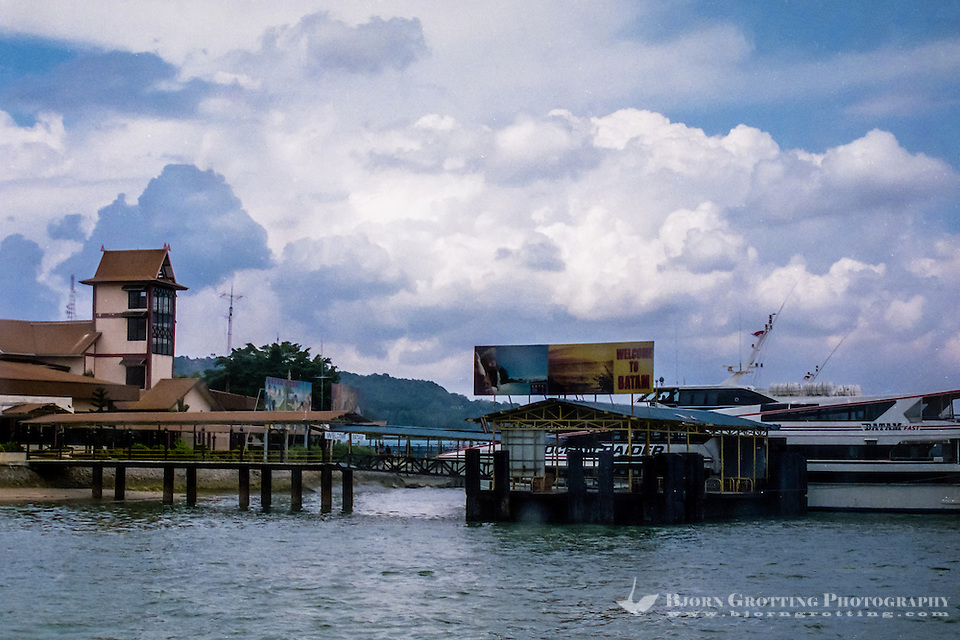 Indonesia, Riau, Batam. The port of Sekupang, the most common port of arrival if you go by boat from Singapore. (Photo Bjorn Grotting)

Most travelers from Singapore to Batam will enter via Sekupang, where ferries shuttle constantly between the two ports. The ferries depart from World Trade Center in Singapore and arrive at Sekupang about 45 minutes later, the first ferry will leave at 7.30 am, and the last about 8 pm. At Sekupang you will easily find a taxi that can take you to other locations of the island, the airport or other ferry terminals, you will also find hotel and ferry counters here. The domestic terminal with boats to the Sumatra mainland is right next door.

The Waterfront City is a resort area on the west coast of Batam, south of Sekupang, that mostly attracts Singaporean visitors. Some of the activities here are water sports, bungee-jumping, indoor skiing or simply checking out the nightclubs.

This area facing Tering Bay is planned to be the pride of Batam with a business district, hotels, shops and a marina. Construction started on 29th of November 1987 when President Soharto and Lee Kuan Yew, Singapore’s first Prime Minister, each planted a banyan tree here as a symbol of the friendship between the two countries. Prime Minister Mahathir of Malaysia planted his tree later. The center is still not completed. 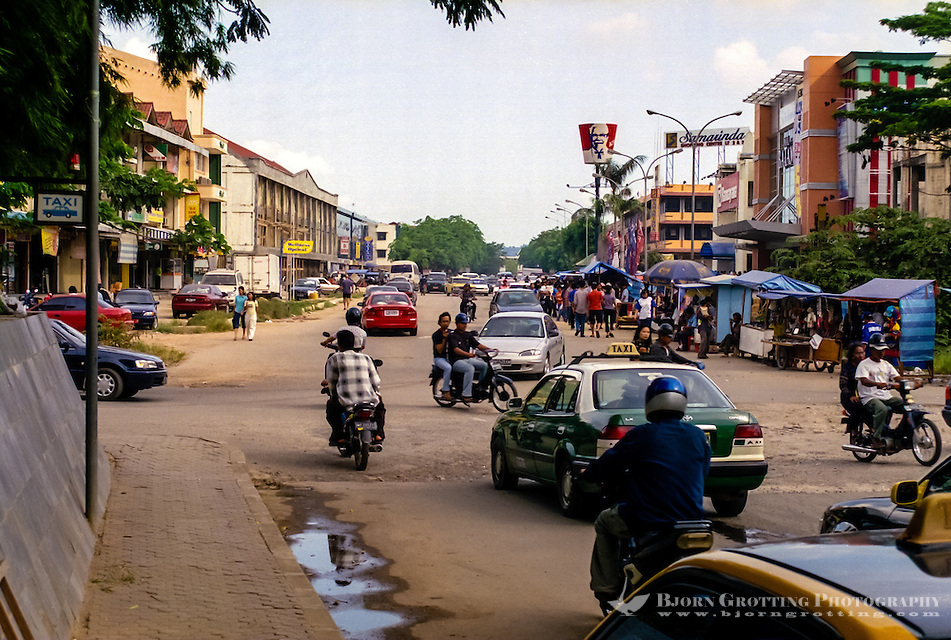 Nagoya (also known as Lubuk Baja) is the original center of Batam, and not a very attractive town with a mix of old and new characterless buildings. But if you are looking for local entertainment this must be the place, with plenty of shops, food stalls, nightlife, discos, music lounges, karaoke, restaurants and many small hotels. It is also at the present Batams center of business, trade and finance. Batu Ampar is the port of Nagoya, and from here you can catch a ferry to Singapore, although not as frequently as from Sekupang. Several boats leave daily to Johor Baru in Malaysia as well.

The north-east peninsula of Nongsa is the main tourist area on Batam, an hour’s drive from Sekupang. The lovely resorts were built with Singaporeans in mind, here they can escape from the bustling town to the north and visit one of the golf clubs, eat seafood, bake in the sun on the beach or swim in the sea. Don’t expect to find any cheap hotels here.

This is the site for a large deep-water port under construction, called the Asia Port. When completed it will be able to accommodate very large ships. From nearby Telaga Punggur you can go by boat to neighboring Pulau Bintan, in Kabil fishing village you can also find several seafood restaurants, and watch the passing sampans and fishing craft while you eat.

The best way to get around on the island is by taxi, but you can also go by public transport if comfort is not your main concern, like share taxis. Travel agents can also provide air-conditioned minibuses. Hang Nadim, the modern regional airport, can serve the largest passenger planes, and from here you can reach other destinations in Indonesia, including Jakarta, Pekanbaru, Bandung and Medan. Both Garuda and Singapore Airlines have regular flights here.

As mentioned above there are several boat services to Singapore, as well as Malaysia and to the Sumatran mainland. The ferries depart daily from World Trade Center in Singapore and arrive at Sekupang about 45 minutes later, the first ferry will leave at 7.30 am, and the last about 8 pm. Less frequent services to Singapore leave from Batu Ampar and Nongsa. The service to Malaysia leave from Batu Ampar and to the Sumatran mainland from Sekupang. Telaga Punggur, 30 km southeast of Nagoya, is the main port for speedboats to Tanjung Pinang on Nearby Pulau Bintan, the trip will take about 45 minutes, there are also three boats a day to Tanjung Pinang from Sekupang.

Batam is a duty free zone, and in Nagoya or at the ferry terminal you can shop for items like cigarettes, alcoholic drinks, perfumes, chocolate as well as local handicrafts from all over the Indonesian archipelago. There are many banks in Nagoya, and you can easily find a money exchange counter or a cash machine which accept Visa or MasterCard. Singapore dollars are as welcome as Indonesian rupiah. The main post office is in Batam center south of Nagoya. 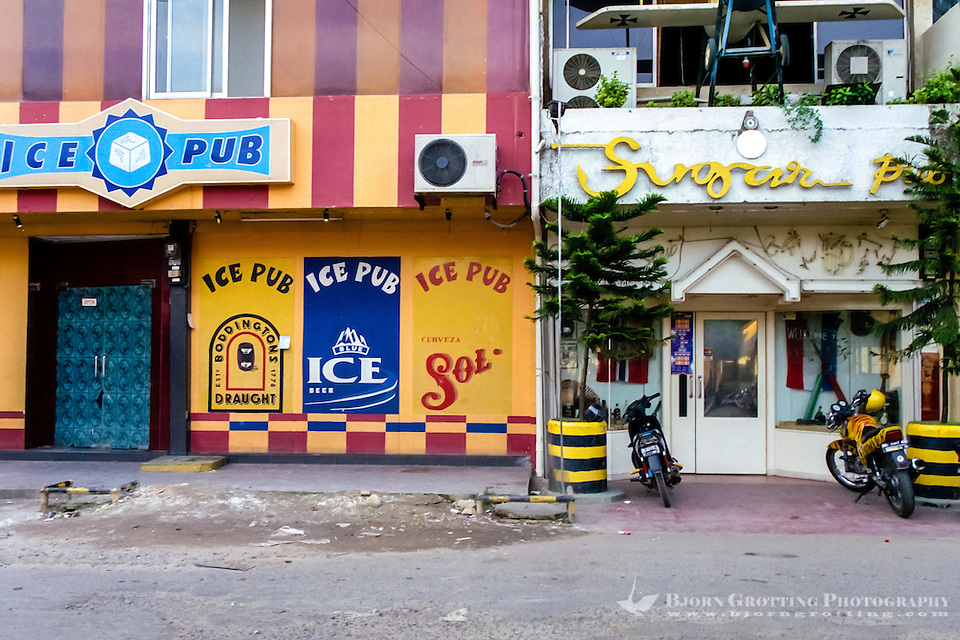 Batam may not make a good first impression on a western tourist with it’s ugly architecture, expensive hotels and unfinished construction sites, but if you like you can easily spend some days here. You can enjoy activities like golf, tennis, water sports, scuba diving, fishing or just relaxing after a good meal of seafood. In the evenings you can experience the local nightlife, probably different from what you are used to back home.