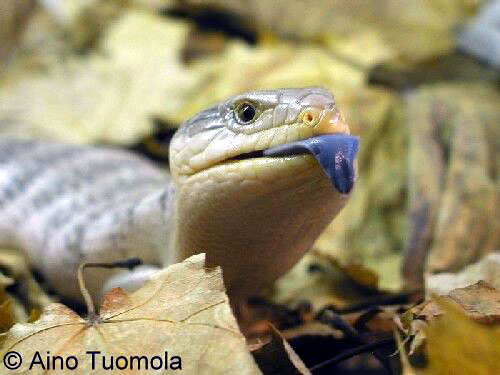 The Indonesian, and Irian Jaya blue-tongue, are often confused for each other, because of the close proximity of their ranges, and the misuse of their common names in current literature (Both species are often referred to as the New Guinea blue-tongue). Indonesian blue-tongued skinks have a very extensive range that includes many islands, which creates a great deal of variation in color and form. Many of these color variations are thought to be local specific. 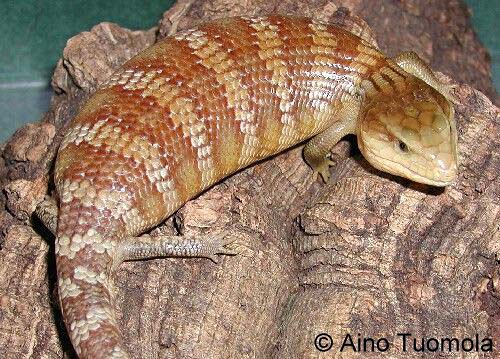 Their coloration varies from light grey to silver with other specimens ranging from gold to brown. Some brown specimens from Ambon and Ceram Island are almost solid black with very little brown showing. The specimens from these two island locals frequently make poor captives, coming in with high parasite loads, and bad dispositions. They are apt to squirm, bite, and defecate whenever they are handled, and they have high mortality rates. On the other hand there are other brown specimens of very similar coloration and pattern, from the Sarong region of Irian Jaya, that make much better pets. The Sarong specimens are docile, quite hardy, and they get a lot bigger. Indonesian blue-tongues are usually banded with thin black bands that may or may not have peppering of the background color in them. One of their distinguishing traits is the coloration of their limbs. Their fore and hind limbs are always black, and may or may not possess a certain amount of white spotting on them.

Most specimens also have a large black rectangular blotch on the side of their neck that starts just behind the ear, and extends back just past the front legs. Indonesian blue-tongues usually have a single black stripe on the top of the neck. The ventral surface may be orange or cream in coloration, sometimes with varying amounts of black, forming a reticulated or almost checkerboard pattern. The tail is the longest of all the blue-tongue species, accounting for 85-95% of the snout-vent length. Of course, this is taking into consideration that the animal must have its original full tail. The tail’s banding is usually obscured or totally absent and it is often black with some white, gold, or brown flecking on it creating a granite-like pattern. A broken thin black temporal streak may or may not be present. The anterior temporal scales on the Indonesian blue-tongue are elongated and much longer than the other temporal scales. It is also very common for them to have a black outlining on the edges of the large scales on their heads. 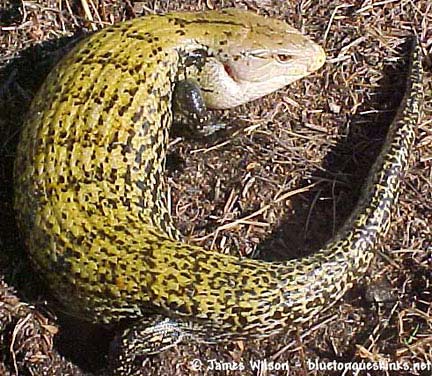 Article by James Wilson
Prepared for use with permission from bluetongueskinks.net