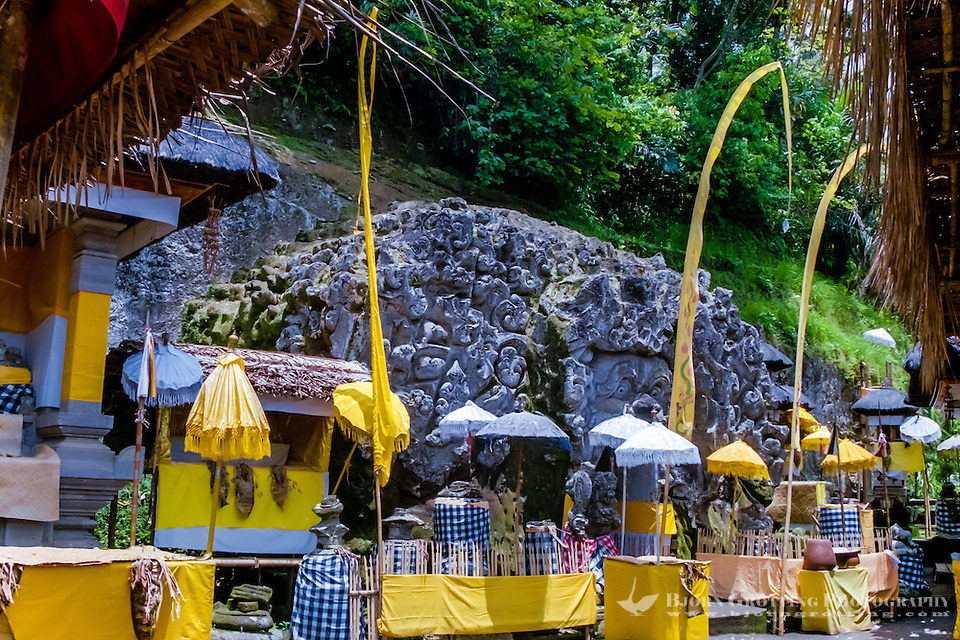 The mysterious Goa Gajah (elephant cave) is one of the oldest relics on Bali. The exact time of origin is uncertain, but archeologists estimate the cave to have been built around year 1022 AD. This was long before Majapahit entered the island, and also hundreds of years before the first Europeans set foot here.

The site is a mix of Hindu- and Buddhist symbols, among them the cave with the entrance in an artistically carved cliff, a bathing pool with fountains, a statue of the Buddhist goddess Hariti, as well as several other Buddha figures.

The cave was only known by the locals until 1923, when a young Dutch found the place after hearing some conversation about a monster head with elephant ears. 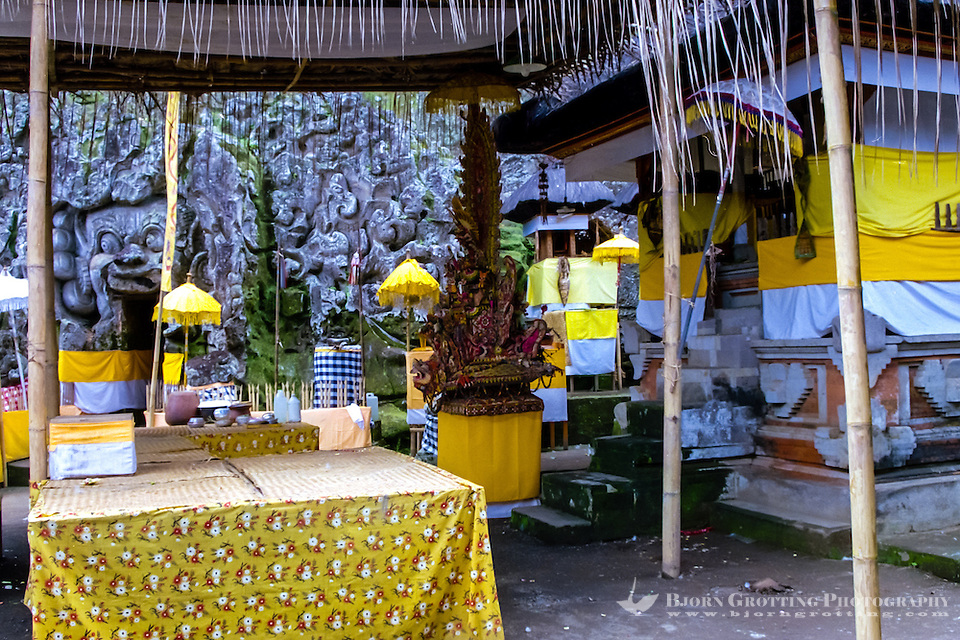 You enter the cave through the mouth of the demon. (Photo Bjorn Grotting)

It soon became apparent that it was rather a head of a demon, not an elephant, but this misunderstanding probably gave the cave it’s name. Another explanation for the name is that it comes from the statue of the elephant god Ganesh, a third explanation is that Javanese writings from 1365 says that a Buddhist hermit lived near Lwa Gajah, the elephant river. This probably points to the Petanu river close by and probably also to the cave, which is quite similar to hermitages found on East Java. Yet another interpretation of the name is that the cave was created by the legendary giant Kebo Iwo, who also according to the myth built Gunung Kawi and Yeh Pulu. The demon above the cave entrance should then be a portrait of the same Kebo Iwo. 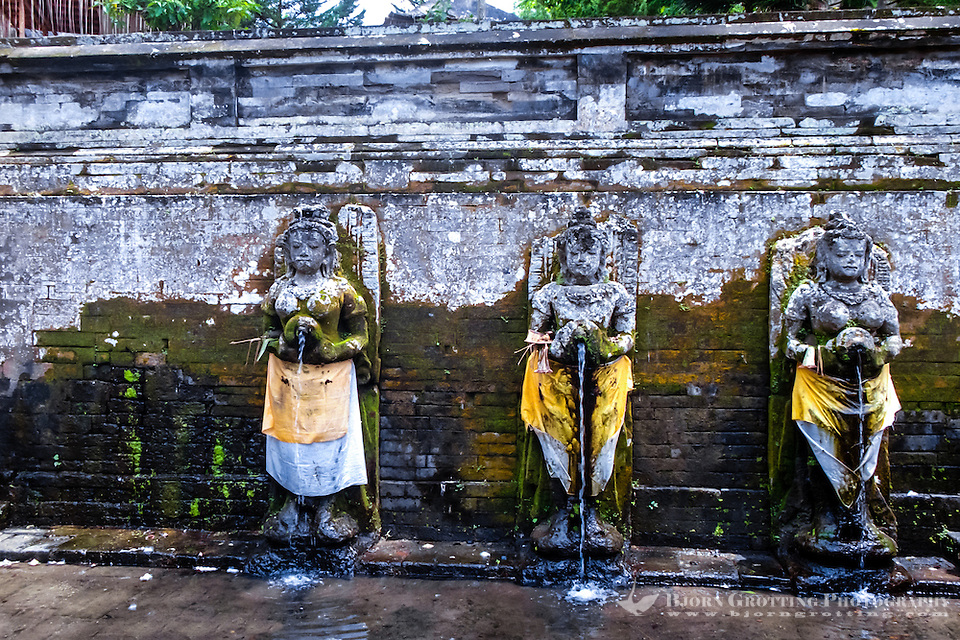 The demon is in fact meant to protect the site, this is quite common on Bali were demonic faces like this is found on temples and other buildings all over the island. Who this particular demon is meant to portrait is still disputed, except for Kebo Iwo it has been suggested that it is the witch Rangda or maybe Shiva Pasiputi. Shiva Pasiputi divided the cosmic mountain Mahameru in two and created the rival mountains Agung and Batur, as well as the characteristic split gate that can be seen everywhere on Bali. The fingertips of the demon seems to push aside a jungle of carved animals, cliffs, leaves, waves and demons. 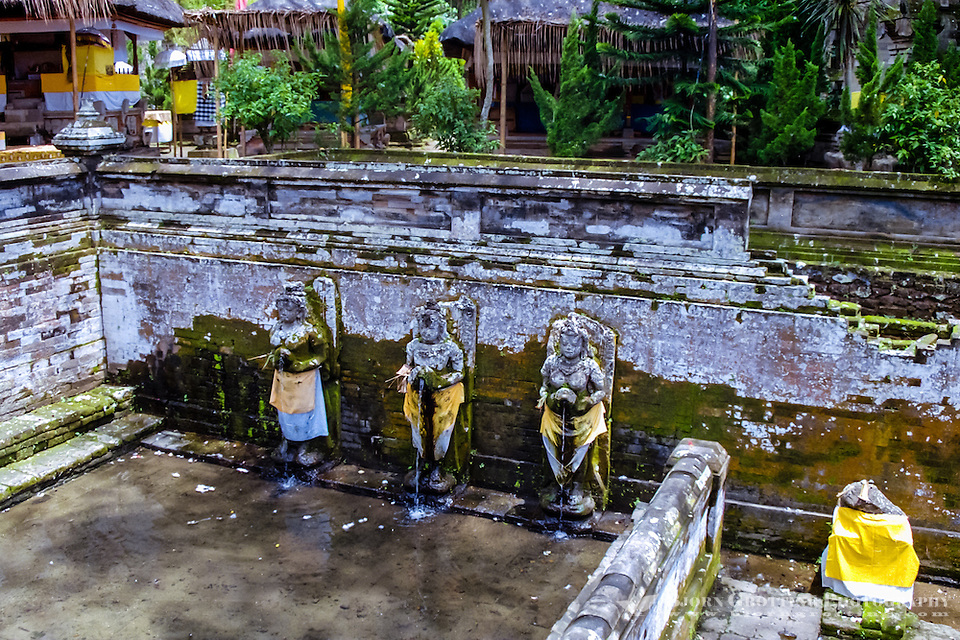 The cave is manmade and has the shape of a T, it is two meters high and one meter wide. It contain 15 niches which is regarded as proof that this was not a temple. At the end of the left wing there is a one meter tall, four armed statue of the elephant god Ganesh, at the end of the right wing there is three half meter tall “linga”, fertility symbols of the Hindu God Shiva. On the walls there are some old-Javanese writings which has helped to establish the time of origin of the cave. 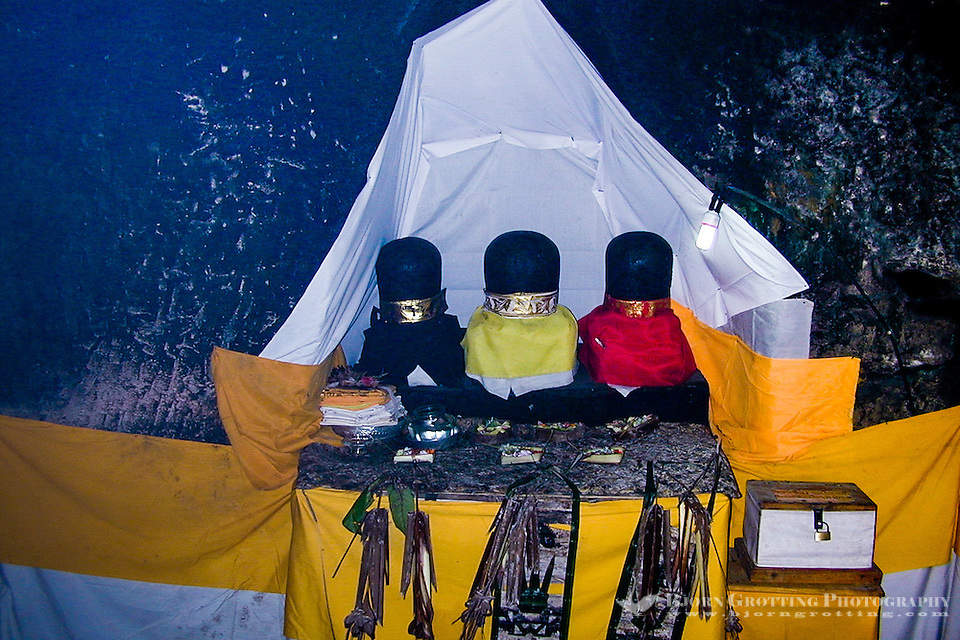 In the right wing of the cave: three linga, symbols of fertility. (Photo Bjorn Grotting)

The bathing place in front of the cave was not discovered before 1954. It then became apparent that the whole complex has been an important religious site in old Bali.

Parts of the statues in the bathing pools were first found close by the cave, and later the bathing pool itself were excavated. The bathing pools are divided in two, one for men and one for women, each part with three water sprouting statues. The statue parts first found fit perfectly to the parts found by the pools. Another bathing place were later found further down the hill, with steps leading down to it. These findings is said to be the most important done on Bali since WW2. 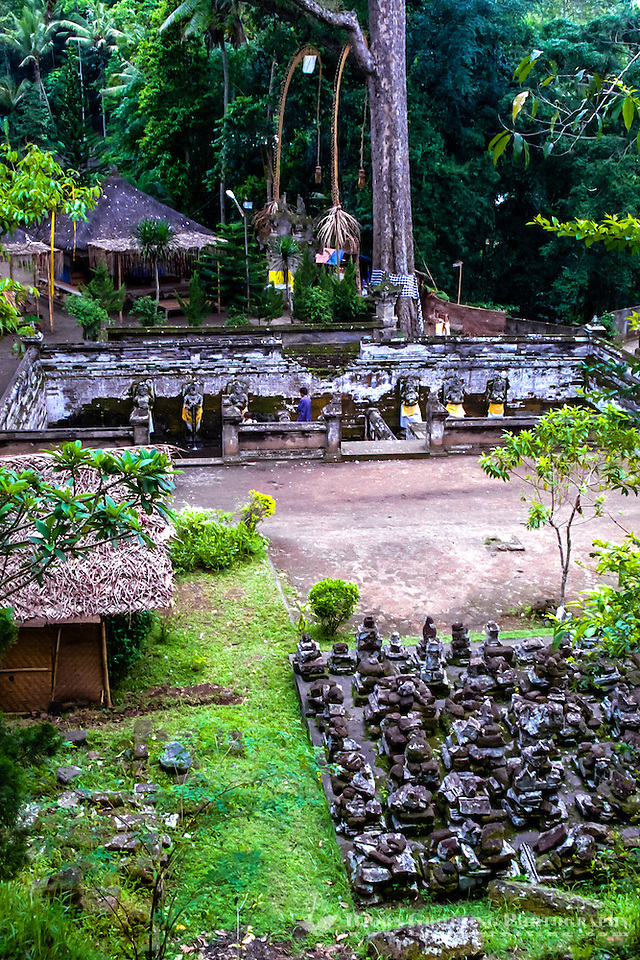 A view over the old bathing pools. Behind the pools a large, sacred tree. The caves entrance is located to the left. (Photo Bjorn Grotting)

To the left of the cave there is a statue of the Buddhist goddess Hariti, a child-eating witch worshipped in India. She converted to Buddhism and transformed into a fertility goddess and a protector of children. On Bali she is also known as Men Brayut, a name often used on poor women with many children. South of the cave there is a small shrine with two Buddha figures, or it used to be two until 2000 when one was stolen. Close by there is some fragments of old relief’s, probably much older than the cave. 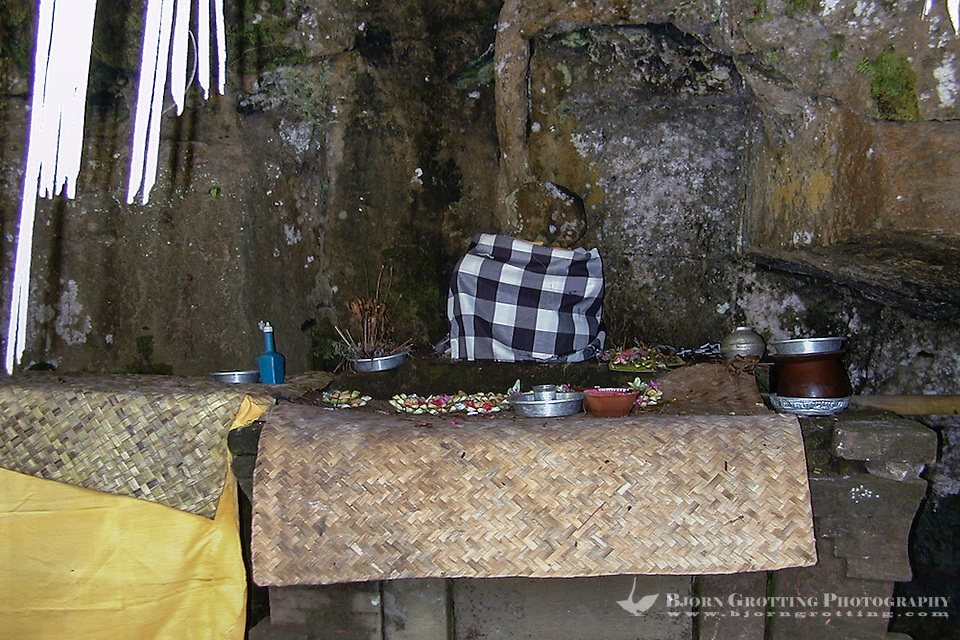 A Buddha figure outside the cave, the other was stolen in 2000. (Photo Bjorn Grotting)

Goa Gajah can be difficult to find on your own, from south you drive towards Gianyar, by the “baby monument” after Batuan you continue straight ahead towards Ubud, then turn right at Teges towards Bedulu. The site is on the right side two kilometers before the Bedulu village. You know you’re there when you see the large parking lot and the many souvenir stalls. From Goa Gajah it is possible to take a walk through the rice fields in Bedulu and to Yeh Pulu, it is recommended that you pay one of the local kids to guide you.