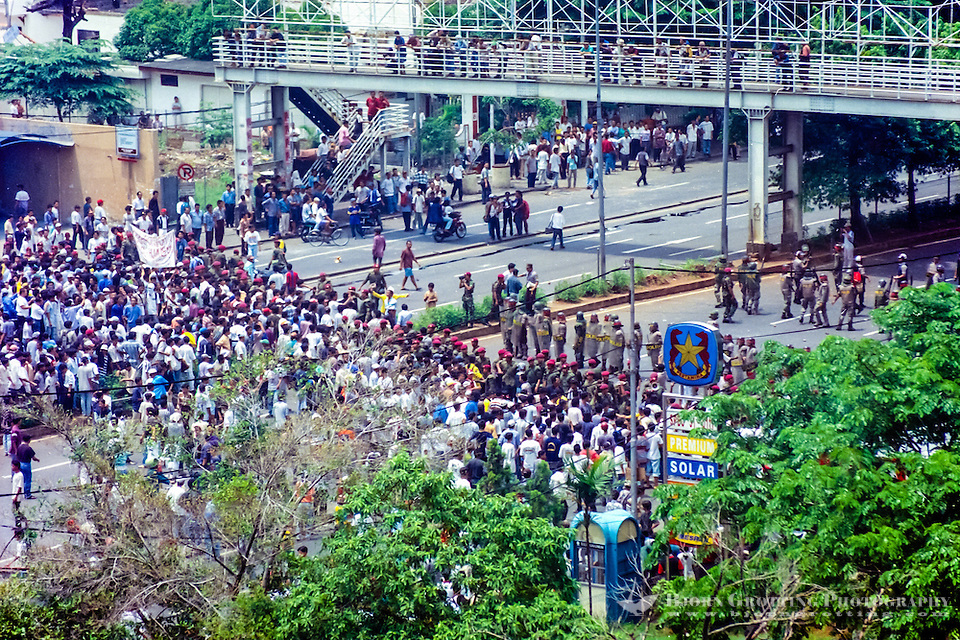 This article will try to give some background information about the safety situation in Indonesia, but it must be up to you to decide if it is safe enough to visit the country. Be aware that the situation changes frequently, so make sure you have the latest and most reliable information before you make up your mind. Don’t get too intimidated by what is written in the western press, most of Indonesia is safe with very friendly people, as you soon will discover when you go there.

In recent years a number of bombs have been set off in the big cities like Jakarta, Medan and Manado. The bomb attacks has mainly been targeted at shopping malls, hotels and churches. The worst incident is the attack on two nightclubs on Bali 12th of October 2002 which claimed more than 200 lives, with many more injured. On 17 July 2009 suicide bombers carried out attacks against the Ritz Carlton and Marriott Hotels in Jakarta. Seven people were killed and 55 injured. There is an increasing activity and threat from terrorist groups in Indonesia.

In Maluku there has been religious fightings between Muslims and Christians since 1998, more than 6.000 have died. It is commonly believed that the Muslim extremist group Laskar Jihad is behind the disturbances. Their leader have been arrested, and apparently most of the Laskar Jihad members have returned to Central Java. Northern Maluku is now open for travelers again, while Ambon and South Maluku is still a little bit restless, and you need a permit to travel there (as of June 2003). However some people have traveled to Banda and Kai islands with no problems, and have organized the permit with the local police there. It is recommended to obtain the permit beforehand, in order to avoid excessive bribes (fines). Keep an eye on the situation though, as renewed problems may arise, and Maluku is at the moment best avoided by the unexperienced traveler. Religious segregation still exist, some areas are filled with refugees and you may experience an anti-western mood, even if this is unlikely to turn violent.

The OPM guerilla on Papua have been fighting for independence for decades, and now and then there are reports of trouble there, like kidnapping of foreigners. Much of this has taken place in relation to the Freeport Mine close to Timika in Central Papua, which is seen as imperialistic (run by an American company) and polluting. Recently there was a shooting episode here which killed several American teachers. Travelers may need a permit to visit certain regions of the Papua province. Staying in the big cities is considered to be safe. Check the conditions before you visit the more remote areas, many travelers visit Papua every year without problems.

From Wikipedia: Aceh was the closest point of land to the epicenter of the massive 2004 Indian Ocean earthquake, which triggered a tsunami that devastated much of the western coast of the region, including part of the capital of Banda Aceh. 226,000 Indonesians were killed or went missing in the disaster, and approximately 500,000 were left homeless,[4] with these casualties particularly pronounced in Aceh. This event helped trigger the peace agreement between the government of Indonesia and the Free Aceh Movement (GAM), mediated by former Finnish president Martti Ahtisaari, with the signing of a MoU on August 15, 2005. With the assistance of the European Union through the Aceh monitoring mission as of December 2005, the peace has held.

Sulawesi is safe, except for the Poso district in Central Sulawesi which have seen clashes between Christians and Muslims. Also here the Laskar Jihad group is suspected to be behind much of the killings and violence. According to Lonely Planet the Philippine terrorist organization Abu Sayyaf is said to be active in North Sulawesi, but this is still a safe place to visit. There have been a couple of episodes involving bombs in Manado, one just after the Bali-bombing, but probably not related to this.

West Timor was considered to be unsafe the months before and after the independence of East-Timor, and you should still keep an eye open if you visit this area.

Fightings between the indigenous Dayak population and migrant Madurese on West Kalimantan has occurred about eight times in the last two decades. Ethnic tensions continue in West Kalimantan, where hundreds of people were killed and thousands displaced following fightings that began in late December 1996. Bloody clashes between the indigenous Dayak people, migrants from Madura and the military started in early January 1997, and resulted in a death toll of over 500. The history of clashes between the Dayak and the Madurese go back as far as 1983, when many died in clashes in Pontianak. Many landless peasants from Java and the island of Madura (SE of Java) moved to West Kalimantan as part of a government resettlement program which offers free land, housing and food aid.

Tensions between Christian Dayak, who make up 40 per cent of West Kalimantan’s population, and the Muslim Madurans have been fueled by fears that the migrants will take away land and jobs from the indigenous people. Anthropological accounts of Dayaks make much of their former reputation as headhunters, based on a belief that to take a head is to take the strength of your victim. Actually many Madurese were beheaded during the worst clashes, today thousands of Madurese refugees are sheltering in the West Kalimantan capital, Pontianak. We have not seen any reports of violence here lately.

Lombok island east of Bali saw some religious unrest in January 2000, with several people dead and many churches burnt down. The situation is today under control, and Lombok is considered to be a safe destination.

As you can see, Indonesia has it’s share of problems, and to say it is a perfectly safe place to visit would be a lie, but your home country may not be completely safe either. You should have in mind that this is a huge country with more than 220 million people, and there is very few reports of travelers who have encountered any problems. On the contrary, the large majority feel safe and get along well with the friendly people of Indonesia. In general looting and other criminality is relatively rare, even if it has increased considerably after the monetary crisis.

This article is not 100% up to date, below are some links that may help you get the latest information. Some of the sites may advice you to completely stay away from Indonesia. I cannot give you any personal advice on this, but I recommend that you try to seek a second opinion before you make up your mind.