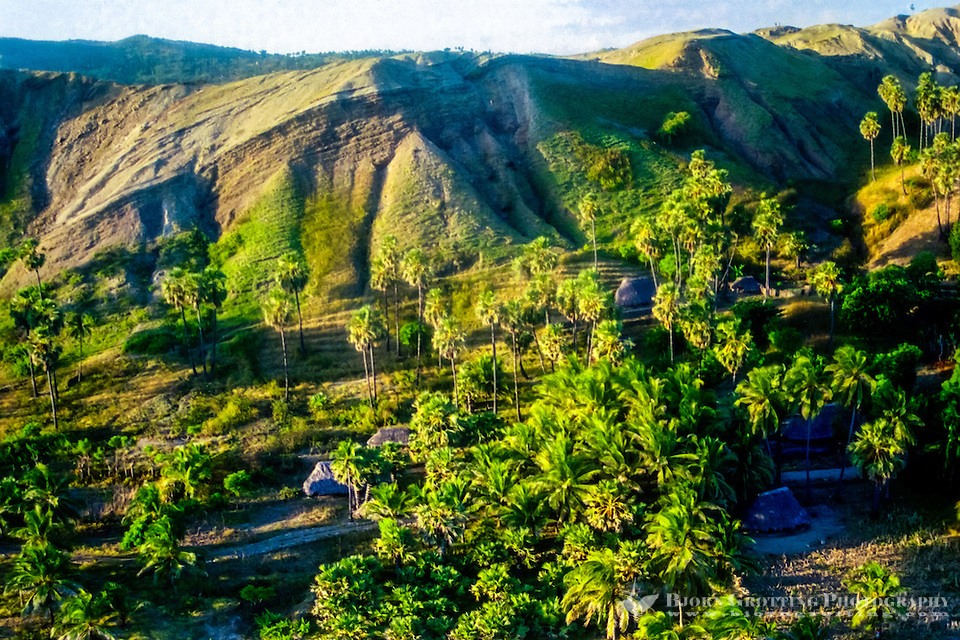 Pulau Sawu, East Nusa Tenggara. Small huts on the southern coast of Sawu (from helicopter). Savu is an island which is situated midway between Sumba and Roti, west of Timor, in Indonesia's eastern province. (Photo Bjorn Grotting)

The Nusa Tenggara islands are mostly poor and sparsely populated. Especially on the eastern islands the climate is dry and the landscape mountainous. Nusa Tenggara is different from the rest of Indonesia both geographically, ethnically and culturally. The main reason for this is the deep waters dividing Nusa Tenggara and the western parts of Indonesia (Sumatra, Java and Borneo).

The islands have therefore effectively been separated from the rest of Indonesia and the Asian mainland, even in the ice age there were no connection between this area and other parts of Asia.

Nusa Tenggara became a transition zone between Asia, Australia and Micronesia. The largest islands in the Nusa Tenggara archipelago is Lombok and Sumbawa, in between there are hundreds of other smaller islands. East Nusa Tenggara consists of 566 islands, the largest are Flores, Sumba and Timor.

The western islands are more fertile than the eastern and have a humid climate which is rich on rain. The eastern islands are dry and not very fertile, mostly caused by the hot and dry winds coming up from the Australian continent. Many coastal areas here do not have any rain at all during large parts of the year.

Flora and fauna of Nusa Tenggara: 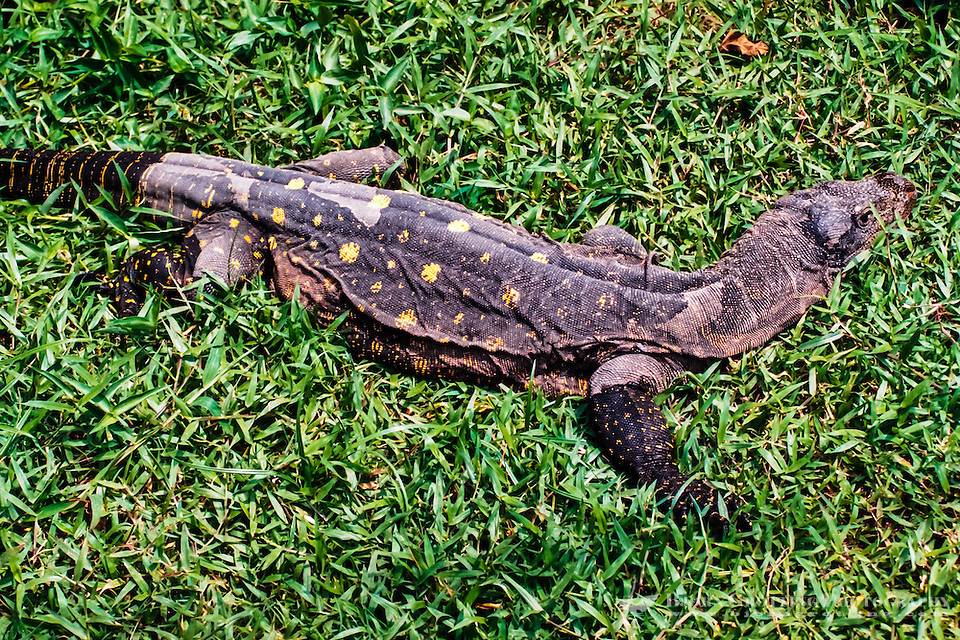 Flora and fauna indicates that this is a transition zone, an area inside the Wallace line where the species are a mix of both Eurasian and Australian fauna, like different species of Australian marsupials and birds that also exists on New Guinea. The most characteristic animal from this region is the famous Komodo Dragon, the largest living lizard, which only exists on the Komodo island and a small number of islands surrounding Komodo. There is a nature reserve on Komodo to protect the large animals, open for visitors if you make an agreement prior to going there. 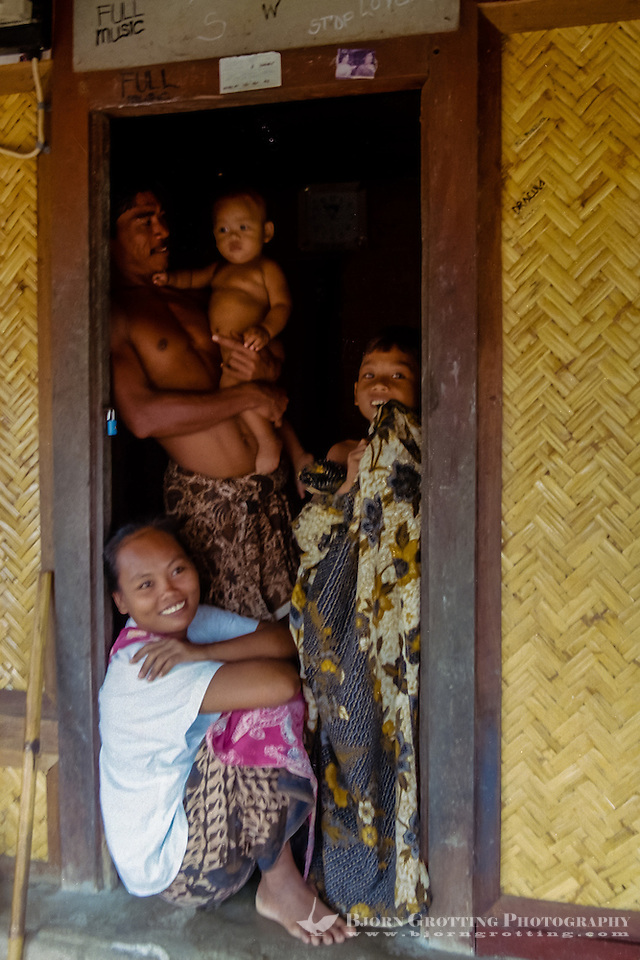 Including Lombok there is a population of about 10 million altogether in Nusa Tenggara. Even if the ethnical differences may be small there are, due to the long distances between the islands, so many cultures and languages here that it is difficult to see the population as one group. The majority on Lombok and Sumbawa are Muslims, while on Flores, Roti and Timor there is a majority of Christians. In isolated areas like West Sumba there are still many who hold on to the old animistic religions.

The population are mostly farmers and fishermen. There is not much spice production on the islands, the most important export article has for many hundred years been sandalwood and other exotic and valuable timber. Other major export products are onion, coffee, rice and beans. The islands are also rich on minerals, there is now a large mining industry on Sumbawa.

The first Chinese and Arabic traders probably arrived here as early as in the 11th century. The Majapahit kingdom (see Java Facts) took control of Nusa Tenggara in the 14th century, but Hinduism was never spread this far east. Islam was introduced in the 15th and 16th century, at the same time there was an intensive slave trade here (see also Lombok and the different islands for their history). 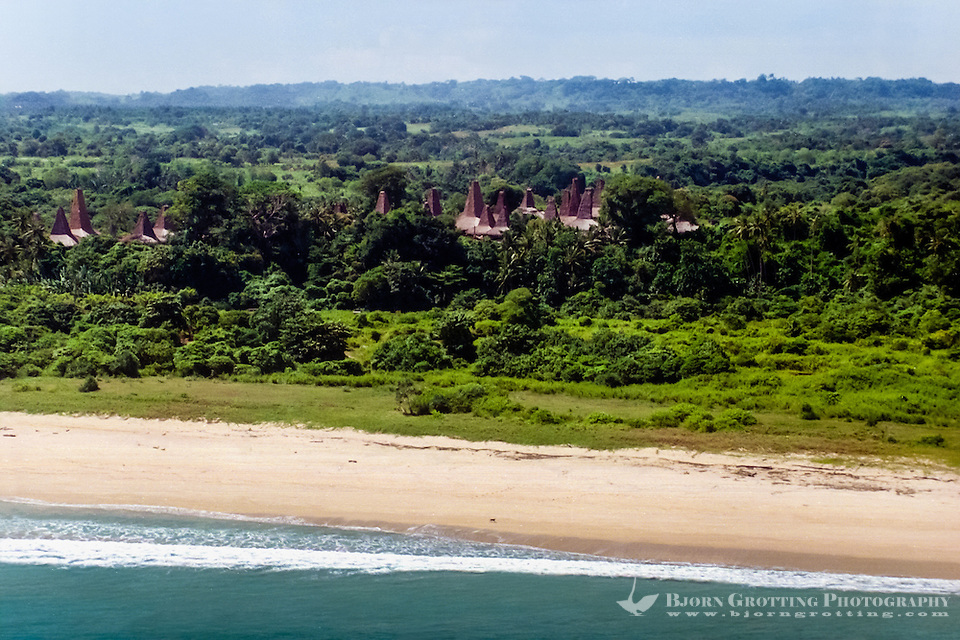 The Europeans first discovered the islands in 1512, when the first Portuguese arrived at Flores via Maluku. They soon built settlements on Timor and Flores, and from there they took control of the trade in the entire region. A lot of the natives converted to Christianity, and today there are large Christian communities (mostly Roman Catholic) on Timor and Flores. Due to the limited natural resources they could find the Dutch were not interested in Nusa Tenggara before around 1850. At the turn of the century they started a military campaign to get full control over absolutely all of the Indonesian islands. After some resistance they reached this goal in 1910, except for Timor which after a deal with Portugal was split in two, Dutch West Timor and Portuguese East Timor.

East Timor was occupied and annexed by Indonesia in 1975, but became an independent nation on the 20th of May 2002 when power were transferred from the UN. The rest of Nusa Tenggara became a part of Indonesia in 1950.

Each island has it’s own unique culture different to what we find on islands like Java and Bali. There are traditional villages here where the way of life has been more or less unaltered for hundreds of years, with artistic craft traditions and dance and music you will not find anywhere else.

The region’s infrastructure has been improved in the recent years, but you still may face a challenging task if you like to travel through this huge archipelago with only ground transport. The main airports with some regularity are Mataram on Lombok, Maumere on Flores and Kupang on West Timor. If you like to travel by air you must make plans with a high possibility of cancellations and changes in mind.