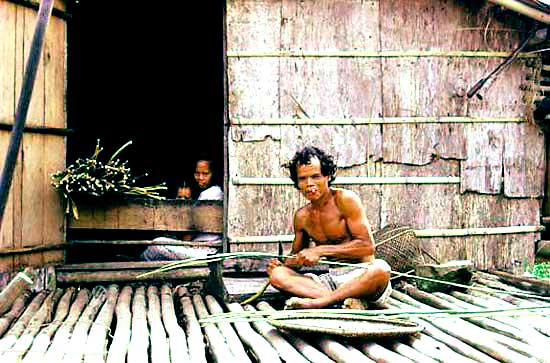 Karim and his wife, splitting rattan on his porch in the village Rantau Layung, Pasir

In short the system is recognised by the farmers cutting, letting dry and burning the forest vegetation before planting crops in the ashes. The soil is cultivated for as long as it can sustain crops adequately with the available labour, usually not more than two to three agricultural seasons, and then the plot is left fallow until sufficient nutrients accumulate in the biomass – and weeds potential is minimised. To put it simply, for every successional time the farmer uses the same peace of land for growing rice the nutrients are depleted and the need for weeding (cultivation) increases. Accordingly, the older the forest one chooses for slashing new fields the more arduous clearing become while nutrients are richer and weeds becomes less of a problem. 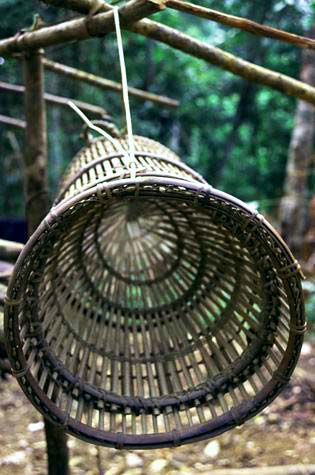 Fish trap made from rattan 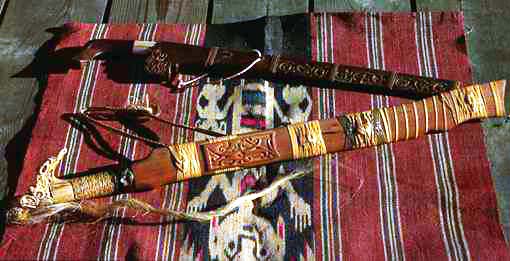 The rice-rattan sequential agroforestry practices of the Dayak people in Kalimatan reach back in history more than 400 years, spreading from the Bentian area up the Mahakam river centrally in East Kalimantan. Like other shifting cultivation practices, the farmers first clear a portion of forest to plant padi (rice) intercropped with various types of vegetables and fruits, and at the same time plant rattan seeds or seedlings at strategic points (tanah mata). After the harvest of rice and secondary crops for one-two to three agricultural seasons, the rattan palm will be left to grow for 7 ++ years before being harvestable. Rattan has the ability to regenerate and shoot sprouts after being harvested, implying that harvesting can be maintained continuously on the plot once the plant reach maturity. Finally, after customarily more than fifteen years, the plot is cleared for rice production again, and any rattan on the plot is all harvested. 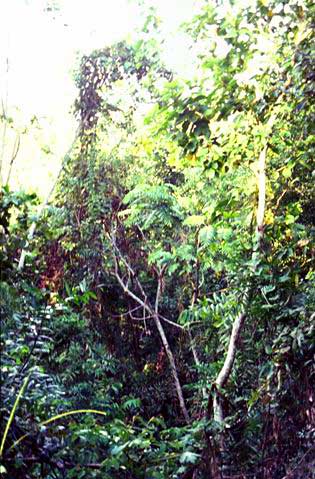 Dence jungle or….. a rattan garden?

Over the late three decades there has been considerable debate on whether traditional systems do have qualities that can be built upon in order to re-empower indigenous people and simultaneously contribute to the conservation of forest reserves. Within this debate, non-timber forest products (NTFPs) such as rattan have been subject to a great deal of attention. NTFPs, their exploitation and utilisation, have always provided an important part of livelihood strategies for tropical forest dwelling people. Both commercial and subsistence forest product extraction make substantial contributions to rural peoples livelihoods throughout the tropical world.