Maluku, Central Maluku, Banda Sea. This is a tiny island on a large reef in the Banda Sea, in the center of the reef a lagoon (from helicopter) (Photo Bjorn Grotting)

The Banda Sea is one of Indonesia’s deepest oceans, at the most more than 6.500 m deep. It spans a large area, all the way to Sulawesi in the west. At the center of the sea south of Seram there are a small group of ten islands plus some uninhabited small corral islands, called the Banda Islands. The most important are Banda Besar, Neira and Gunung Api (“the mountain of fire”). All of the islands are of volcanic origin.

Gunung Api has an active volcano at 658 meter above sea level, and the entire island looks like one circular volcanic cone raising straight up from the sea. Neira is the economic center of the islands, while Banda Besar is the largest, 12 km long and 3 km wide. The volcanic soil on the islands are very fertile, and an abundance of plants, fruits, vegetables and trees are grown here. 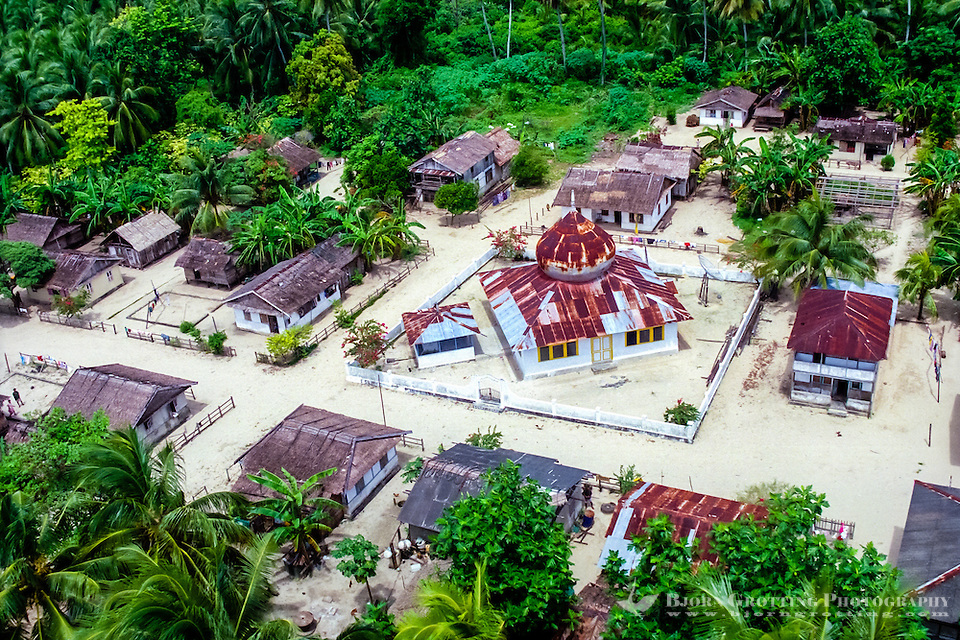 Maluku, Central Maluku, Banda Sea. The mosque has a central place in this village on an island in the Banda Sea (from helicopter). (Photo Bjorn Grotting)

The Banda Islands were first occupied by Portugal in 1512. The Portuguese had control until early in the 17th century, when they were thrown out by the Dutch. Banda Besar was attacked by the Dutch in 1621 and several “unfriendly” Bandanese were massacred, while some fled to the Kai islands. The Dutch started to build plantations, mostly on Banda Besar and Ai, and controlled the islands for 200 years until the British occupied them for a short period during the Napoleon wars. After this they were largely neglected by the Dutch. Spices are still grown here, but the trade lost its importance when the spice production spread to other colonies.

The British built a fort here in 1601 and were for a period exporting nutmeg to Europe from the small island of Run, one of the smallest and most remote Banda Islands, and by this they undermined the Dutch spice monopoly. The Dutch desperately wanted to get hold of this island, but didn’t quite know how without declaring a war against the British. In America the Dutch had bought the small Manhattan island from the local indians for a cheap price, but except for fishing they could not see any value in this purchase. The wise old men in Amsterdam and London therefore suggested a trade, and through a deal in Breda in 1667 New Amsterdam became New York and the Dutch finally got their small spice island. If they only knew what development this area they just got rid of should see the following centuries. A British official later said that “while the British lost their famous nutmeg they got the biggest apple in return”. Maluku, Central Maluku, Banda Sea. This is a tiny island on a large reef in the Banda Sea, in the center of the reef a lagoon (from helicopter). (Photo Bjorn Grotting)

Almost all of the Banda islands are surrounded by beautiful corral reefs with a large variety of fish. This is a great area for snorkeling, diving and sightseeing, some good accommodation are also available. There are a few old forts and colonial buildings here, some rebuilt and some in decay. Another attraction is to climb Gunung Api or just relax on one of the lovely beaches here.

Most of the facilities for travelers are located in Bandaneira, the largest city on the Banda islands, on the Neira island. Here is also the most important harbor and airport.