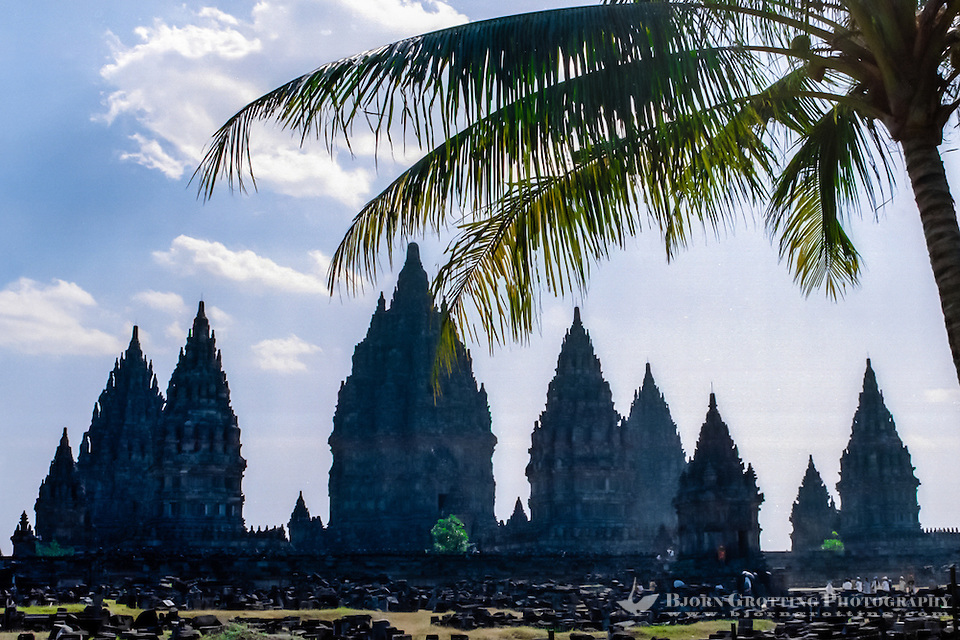 At the boundary between Yogyakarta and Surakarta there are several temples which are scattered within a distance not more than 1 km. It is interesting to note that these temples belong to a sacred place of two religions: Hinduism and Buddhism. The temples were constructed between the eighth century and the ninth century A.D. Prambanan, the name of the complex of these temples, is a beautiful and fertile region.

END_OF_DOCUMENT_TOKEN_TO_BE_REPLACED 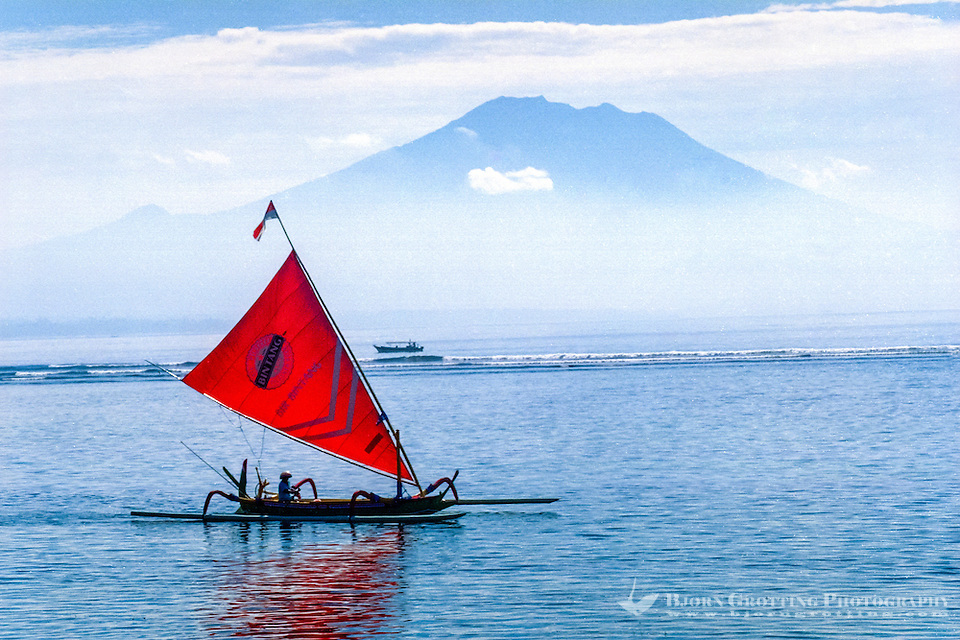 Total area of Bali is 5.623 square kilometers, the island is 145 km long and 80 km wide. The capital is Denpasar on the southern part, the second largest city is Singaraja on the north side of the island. Parts of Bali consist of several large volcanoes, according to old beliefs home of the Gods. The largest is Gunung Agung, 3.142 meters, for long considered to be the center of the universe.

END_OF_DOCUMENT_TOKEN_TO_BE_REPLACED 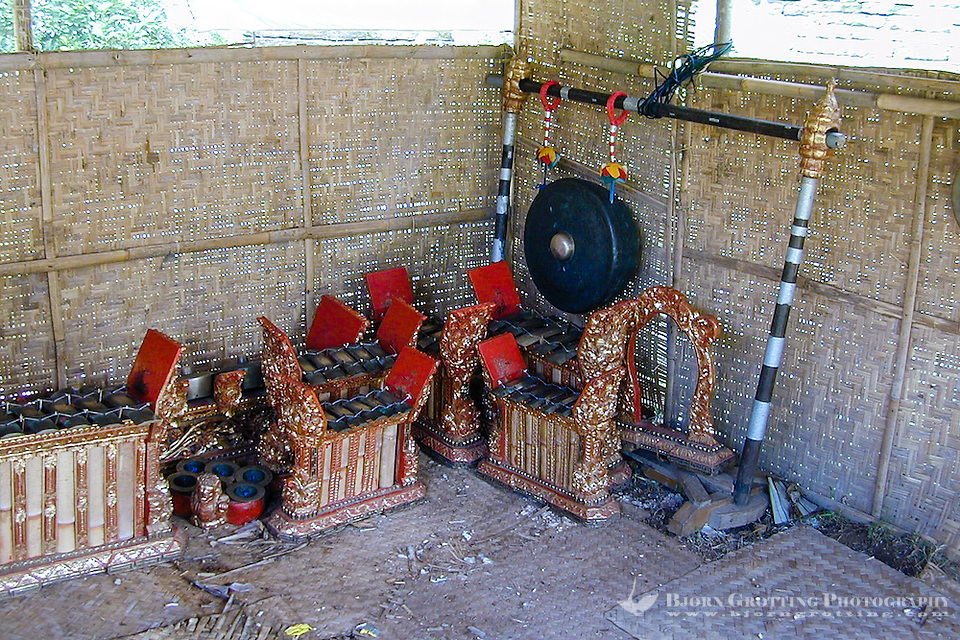 Gamelan music is the sum of diverse foreign influences. Pitch relationships from China, bronze instruments from southeast Asia, drums and modal practice from India, bowed strings from the middle east, and even military styles from Europe contributed to the traditional music we hear in Java and Bali today.

Among the earliest evidence of gamelan instruments is a series of stone relief carvings on the Borobudur Buddhist temple in Central Java (ca. 800 ad).

Borobudur shows the world’s first record of a bar percussion instrument. It appears to be a gambang style “xylophone” with ten wide bars resting over a trough resonator. We have no way to tell, but the bars were most likely made of wood or metal. The instrument is shown being played with two sticks with large, presumably padded, balls on the ends. Cymbals resembling Balinese ceng ceng kopyak used in modern processional music can be seen as well as two-headed hand drums which appear to be of both Javanese barrel shape and Balinese conical styles.

The relief’s of Borobudur and other central Javanese temples of the period, including Prambanan and Candi Sari, depict many other instruments including zithers, lutes, harps, vessel drums (gatam), and transverse flutes. Most are extinct in Indonesia today and may have never really existed on the islands, possibly carved from memory by mainland artisans. Only the bar instrument, cymbals, and drums remain. Notably absent from all relief’s of this period are gongs.

Gongs first appear in the carvings of the thirteenth and fourteenth centuries, among temples of the Majapahit Hindu empire. These depictions show small gongs, often mounted in pairs on a stick or hanging singly from a cord in the hand and played with a padded mallet. Also evident are significant advancements in bar instruments since the time of Borobudur, including four-mallet gambang style xylophones of a type still used in Bali for cremation rites. Suspended bar gangsa and gender as well as saron with resting bars can be found. The earliest evidence of tuned acoustic resonators, bamboo tubes which amplify the sound of the bars, also appears in this period.

Notable in the east Javanese relief’s are images resembling sitar and other gourd resonated plucked string instruments like those used today in India. Many drums depicted in this period also strongly resemble Indian mridanggam and pakawaj. These instruments became extinct in Indonesia, and again may have never existed, but their presence indicates a powerful foreign cultural infusion.

Gongs most probably did not originate in Indonesia. There is no evidence of the development of bronze gongs in Indonesia before the thirteenth century. They simply appear in the record as highly refined instruments, complete with an embossed center and deep shell. Mainland Asia, however, displays a much wider variety of bronze gong styles, including shallower shells, flat faces, and a clear developmental lineage.

Ancient literature suggests that gongs may have been known and used in Indonesia as early as the ninth century. Their original use may have been as instruments of battle, a sound used to encourage soldiers as it instilled fear in their enemies. But, their absence from the earliest stone record suggests that they were either relatively uncommon until that time. Perhaps they were not an instrument of the ruling class, or had no religiously important purpose.

Majapahit is where all the primary elements of modern gamelan came together. Bronze gongs combined with Indian and southeast Asian influences and the “indigenous” music and instruments of the central Javanese cultures which built Borobudur make east Java the birthplace of gamelan as we know it today. Influence of the Majapahit was strong throughout Indonesia and the southern Philippines and reached deep into the mainland of southeast Asia.

In the fourteenth century, people from the middle east introduced the religion of Islam and the fall of the Majapahit empire began. Those who wished to remain Hindu were exiled to Bali, where they remained relatively isolated for hundreds of years.

The gamelan we hear in Bali today is a direct, almost pure, descendant of the music of the Majapahit period. Many instruments in Bali are exactly the same as those recorded by stone carvers in east Java over six centuries ago. But, while the tools of the trade have remained similar, the music has changed and developed. Every generation of musicians in Bali puts their personal stamp on the music. An added variation here, a new section there, or another composition for a particular ritual, add up considerably over six hundred years. Changes in popular taste also had an effect.

In Java, the new Islamic Mataram empire began and music and instrumentations changed considerably. In Bali, we still find primarily homogenous ensembles of bronze, iron, bamboo, etc. But, in central Java, this diverse instrumentation was combined into a single orchestra. Also combined were the two scales, slendro and pelog, which had remained exclusive to certain ensembles and rituals in Majapahit times. While scales and even melodies may have remained the same, theories behind them were amended to create the Javanese “patet” modal system.

The Javanese Mataram empire is responsible for advancing bronze foundry techniques to produce the very large gongs which have become a staple of modern Javanese and Balinese gamelan. The village of Semarang on the north coast of central Java became the new Indonesian center for gong making, supplying instruments to most of Java, Sumatra, Bali, Borneo, and surrounding islands.

The use and purpose of gamelan music in Java was also revised by Mataram. Originally, gamelan was played in outdoor temples for religious rites, to inspire trance and to invite ancestral spirits. But, in Java religious worship was redirected to the royal courts and the old Hindu and Buddhist temples were left to decay. This change of environment gave rise to many of the aesthetic differences between Balinese and Javanese musical styles. Music in Java moved from open air temples to large roofed platforms within the royal court. Mallets were softened to allow the instruments to reverberate within the space in a more pleasing manner. Forms were also slowed down and elongated to take advantage of the new acoustics and lend austerity to the court. Music became largely a cerebral pursuit of the aristocracy and musicians became servants of the courts.

The last hundred years has brought great changes in both Balinese and Javanese music. Older Balinese musicians speak of times when tempos were slow and variations less intense. Older Javanese musicians relate stories of now rare grand court events and lost compositions. Balinese kebyar style is a product of this century, as is the bonang imbal and kembangan playing techniques so typical of today’s Javanese sound.

Gamelan music continues to change and evolve in both style and purpose. Government performing arts schools are the new patrons driving the future. Students in these institutions are required to create new music and dance, expanding the scope and popularity of gamelan both at home and around the world.