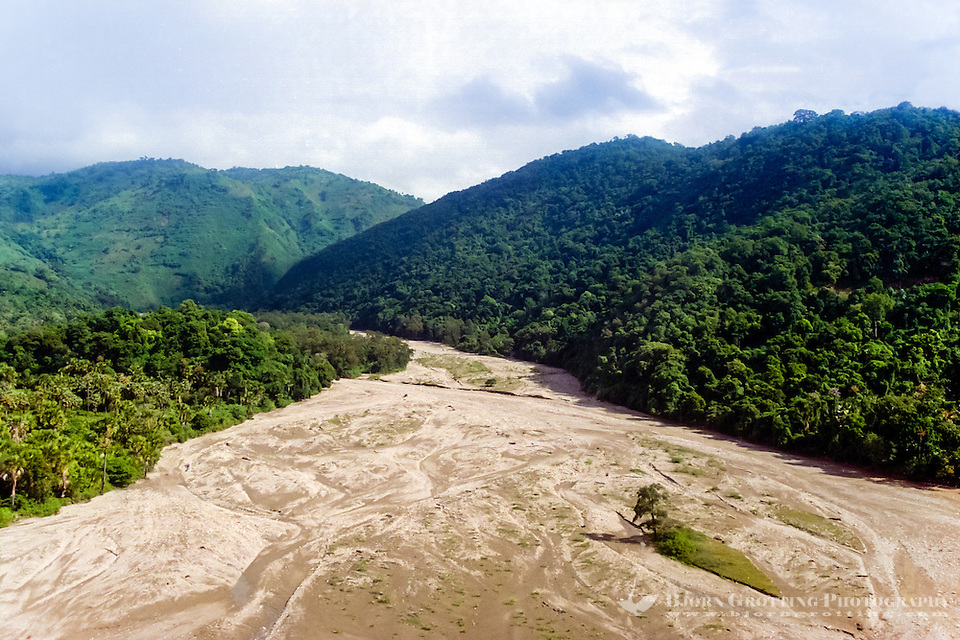 The island has several valuable tree species like eucalyptus, sandalwood, teak and bamboo, in addition gold and silver has been found here. In the Timor Sea, that separates Timor and north Australia, large quantities of oil has been discovered. The development rights for these oilfields were shared between Indonesia and Australia, but is being renegotiated now that East Timor has become an independent state.

Gunung Mutis foothills to the south, with a view to Gunung Lumu (1375 m) in the background.. Photo © Narve Rio

The majority of the population has a common ethnic background, a mix of Malay, Polynesian and Papuan, but there is also a small group of Chinese heritage. The mountainous landscape have kept the villages isolated and with very little contact with each other, causing significant variations in architecture and culture all over the island. Large groups of the inhabitants are Christian, some are Muslim and some are still hanging on to the old traditional religions from the region.

Before the arrival of the Europeans the island was split in several small rival kingdoms, the two largest were Tetum and Atoni, which is the largest group on West Timor today. Atoni was probably influenced by Hinduism, but at the same time they kept their animistic religion. The first Europeans that arrived on Timor was the Portuguese, probably as early as 1512. Due to the large quantities of sandalwood the island was considered to have large value. This led to a conflict between Portugal and the Netherlands regarding control of the trade from Timor, and in the middle of the 17th century the Dutch occupied Kupang on West Timor, now the provincial capital. In the middle of the 18th century the Portuguese withdrew to the eastern part of the island.

Thursday market in Kapan, the major outlet for agricultural produce in Gunung Mutis. In the outskirts of the market you will find villagers from far up in the mountains, perhaps days of walking away, selling of their small produce of bananas, pineapple, garlic etc, as well as handicrafts like the famous ikat weavings of East Nusa Tenggara. Photo © Narve Rio

The two nations later made a series of agreements, the latest in 1914, that established the boundaries of Timor. The western part became Dutch Timor, while the eastern part (see East Timor) remained Portuguese Timor until 1975. The island’s interior was largely left alone by the colonial powers, and old traditions, culture and religion was allowed to go on as it always had. The Dutch finally left West Timor in 1949, while the Portuguese continued to hang on to their colony, a tragic decision for the further development of East Timor.

The largest and only city of any significance on West Timor is Kupang. There are flights from Kupang to cities like Jakarta and Darwin in north Australia. Kupang is today a booming city and a center for the whole region. The tourism here are still not fully developed, and during the recent violent developments on East Timor the tourist industry was practically non-existent. The island has an unique landscape with high mountains and a long coastline, but there is not many facilities here yet.